Posted on September 20, 2016 by daysingarden

Last year, the Fortex pole beans from Johnny’s Selected Seeds, which have been a favorite of mine for several years, developed a rust on the leaves that pretty much ended the bean season for me. As can be seen in the photo above, taken September 9, this year’s bean plants are healthy and producing. Of course, this summer has been much drier, and I have used irrigation hoses, not getting water on the leaves. But I also think the bean plants are healthier this year because I planted fewer of them. 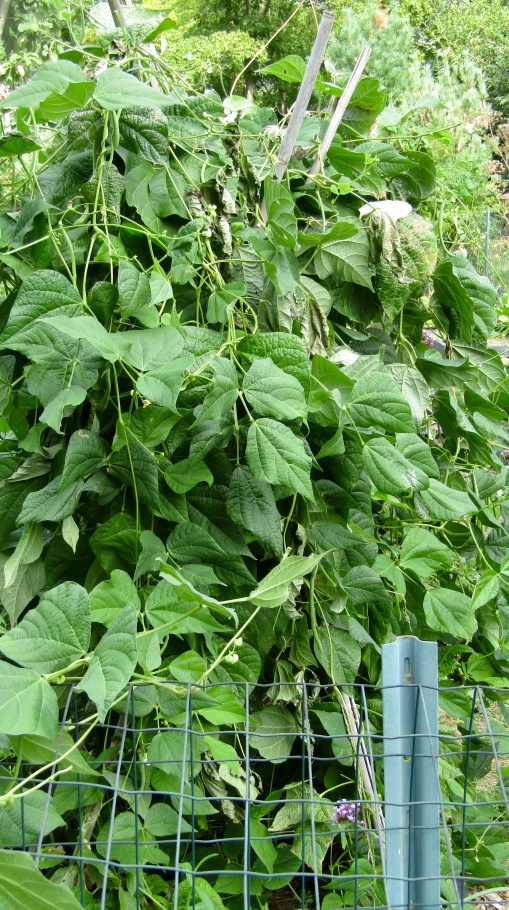 Johnny’s recommends planting 7 seeds at the base of each pole. I use a teepee with 6 poles coming together at the top. Last year, I think the beans leaves and vines were too thick, which may have contributed to the rust problem. This year, I planted 2 seeds per pole and thinned to 1 bean plant per pole. This offered more air flow through the leaves. To make up for fewer plants, 2 beds–3’x3′–were planted to beans, and bean production has exceeded last year’s. I know I’m eating beans every day. Good thing I like them.

Since I made the decision that green beans should be eaten in season, I’ve stopped trying to dry them or freeze them for winter use. Instead of that traditional bean casserole at Thanksgiving and Christmas, I plan on winter squash or sweet potatoes. This summer, I’ve been careful in cooking the beans to leave them still a little crunchy. I mix in a little olive oil rather than butter, add a little salt and a lot of pepper, and eat away, knowing I’m having a super healthy, low-calorie treat. Summer is good. Looks like the beans will still be producing into the fall as well.

So, next year, remember to plant fewer beans per pole. What about trying a new variety of beans. Well, just like Matt’s wild cherry tomatoes are perfect, so Fortex pole beans are perfect. And I never mess with perfection.

← Salsa synchronicity; or, where’s the cilantro
Some problems with peppers →