Posted on September 15, 2015 by daysingarden

According to NABA-North New Jersey Butterfly Club website, black swallowtails are black with a prominent line of large yellow spots across both wings as well as smaller submarginal yellow spots. Females have blue spots on hindwing near tail. The blue spots are not pronounced on this butterfly, yet I think it must be a female black swallowtail. NABA-NJ also notes a pale spot near front edge of front wing just inward of yellow spots, as can be seen in the photo above. Spicebush swallowtails do not have this spot, so it’s an important distinguishing feature. I have not as yet encountered a spicebush swallowtail.

Butterflies nectar through a proboscis, which is a feature of these photos.  Minuscule, but essential. This black swallowtail is so busy nectaring, she barely noticed my presence as I took photos fast and furiously. What an awesome creature up close.

The flowers are verbena (Verbena bonariensis), which readily reseed themselves from year to year. Their purple blossoms grow on long, thin stems and often appear to be floating above the humdrum notions of leaves and stems. These verbena have taken advantage of the vegetable garden fence to support their etherial habit. Lovely. Johnny’s Selected Seeds catalog says that verbena attracts butterflies. Yes, indeed.

According to the NABA-North Jersey website, black swallowtails are common to New Jersey. They are attracted to gardens by purple coneflowers and milkweed. Their larval food plants include fennel, parsley, dill, and Queen Anne’s lace (Daucus carrot). With the exception of Queen Anne’s lace, all of these plants are present in my garden. Why aren’t there dozens of black swallowtails, instead of just 1, so far.

So now I must ask myself if eating the last fennel bulb is more important than leaving it in the garden in the hope that it will become a larval plant for the black swallowtail. Next year, I will grow more parsley and fennel, as well as attempting to seed some Queen Anne’s lace in the old apple tree area. Its white lacy blossoms go well with the blue chicory and yellow sunflowers. Can’t wait. 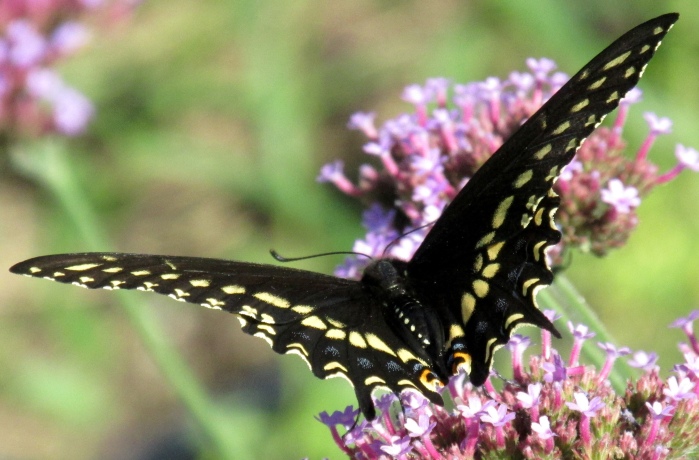 Black swallowtail. I hope to see many more of your kind this season and next.