Posted on September 8, 2015 by daysingarden

My much loved Fortex green pole beans have rusty leaves caused by a fungus and also skeletonized leaves–leaves that are reduced to a thin brown papery tissue–caused by spider mites. 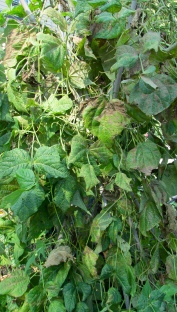 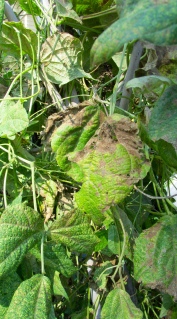 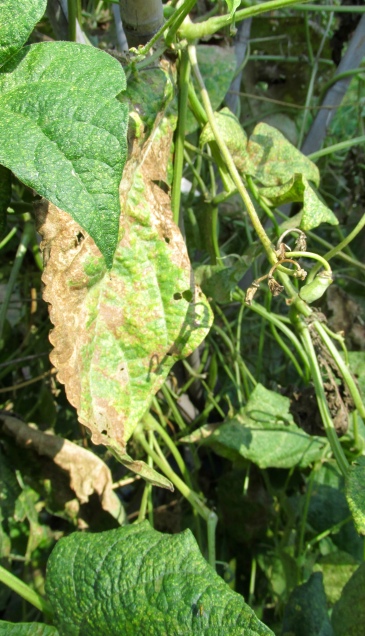 Above are photos of the gruesome devastation. I hate to admit it, but I think last year’s pole beans had similar problems at the end of the season. Because it was late in the growing season, I just pulled them out and didn’t think too much about it. I do know the vines were not composted. They were sent curbside for municipal pickup. And I do remember cleaning up all the brown crumpled bean leaves left in the raised bed. In such a small garden, I know it’s a good thing to clean up thoroughly at the end of a growing season.

Crop rotation is also important. Unfortunately, I think last year’s green pole beans were just 1 raised bed over from this year’s pole beans. That probably wasn’t enough of a rotation to prevent the fungus, which can live in the ground from season to season. This information comes from various online sites.

Anyway, this being the first week in September, I could have pulled up the bean vines, cleaned up the dead leaves, and called it a season for the green pole beans. And I may still do just that. But first, I thought I should try to eliminate the rusty and skeletonized leaves and see if the bean vines might make a comeback. Some Neptune’s Harvest fish fertilizer is on order from Johnny’s Selected Seeds. When it gets here, I will fertilize the bean vines. I’ve been watering them using drip irrigation hoses, but a good rain would help everything, including me. There’s a chance of rain later this week. 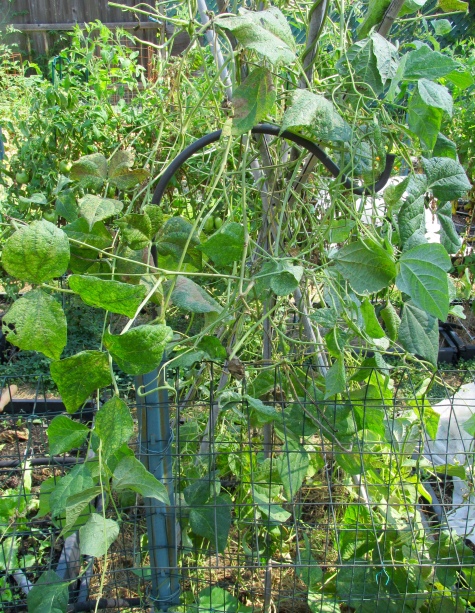 Above is a photo of the pole bean vines after I cut all the damaged leaves and vines off. I fully expect the fungus and the spider mites will simply continue in their destructive ways, but it is a good experiment. Is it best to just get rid of troubled vines, or is there a chance for recovery.

According to the post Green pole beans in June, I was so proud of myself for thinning the beans from 3 plants per pole to 2 plants per pole. Now, I’m thinking that 1 plant per pole may be best since the rusty leaf fungus is triggered by excess moisture or humidity.

We haven’t had excessive moisture in terms of rain this summer, but the humidity has been oppressive for plants and humans alike. So, better air flow through the vines might cut the damage from humidity and help to save them from the rusty leaf fungus.

Also, the green pole beans must be planted at the opposite end of the vegetable garden next year. As far away from this year’s diseased bed as possible. If that doesn’t work, I guess I’ll have to not plant pole beans for a couple of years. That would be sad indeed. 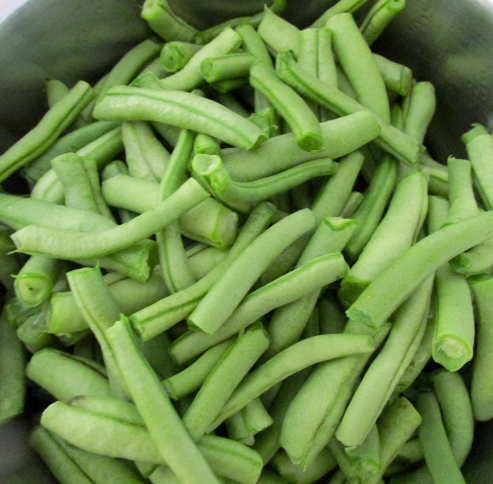 While I’m waiting to see if the pole bean vines survive this pestilence or not, I may as well have a small celebration of green beans. In the photo above are green beans ready to be boiled 9 minutes to a crunchy perfection and eaten immediately, mostly by me. I did make some dilly beans. I also tried dehydrating some beans. We’ll see about that. The dehydrated beans may be good in a stew next winter, but I have my doubts.

I’ve made one momentous decision about green beans. Which is that they are a seasonal delight. Just like fresh tomatoes. Don’t try to fix up some fancy green bean recipe for Thanksgiving or Christmas dinners. Mushrooms, or  fried onion rings, with cream sauce. It just doesn’t work. Green beans from the garden frozen for winter use are mediocre at best. This may all sound like sour grapes, since my green bean supply has probably just been decimated by fungus and spider mites, but traditional holiday green bean recipes have been giving me nightmares for several years now. Time to give them up. Go for the squash and sweet potato recipes for winter. Green beans are for summer. So there.

So, back to summer green beans. Our grand discovery of this summer for many uses is Trader Joe’s crème fraîche. Scrambled eggs. Corn on the cob. Green beans. It’s decadent, but has fewer calories than butter. How’s that for a win-win. I can make a meal of green beans with crème fraîche. Add a little ham or bacon. How about a few cherry tomatoes. Some basil leaves are never wrong. Capers are good. Amazing how filling and satisfying a dish it becomes.

So, I’m hoping for the best for the Fortex green pole bean vines in the garden this summer. And preparing for the worst.