Posted on September 7, 2015 by daysingarden 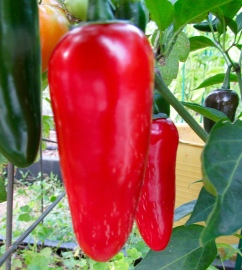 I no more than noted in Johnny’s Selected Seeds catalog that most hot peppers take 20 more days from green to turn red than I found El Jefe jalapeños and Cheyenne cayenne chiles turning red on the pepper plants in the garden. Woo hoo. The jalapeños are shown in the 2 outside photos above. The cayennes in the middle photos.

When I brought them inside, I could see that the cayennes should have been left on the pepper plant for another day or so. Note the green areas on the cayennes in the photo above. Still, I’m a big believer in counter-ripe produce. Particularly with tomatoes. Too many birds and insects are anticipating a ripe tomato as much as I am. Once tomatoes start to turn and soften a bit, they are far safer on the kitchen counter and ripen up just fine there.

Back to red ripe hot peppers. They could be left on the pepper plants longer since wildlife are not fond of hot peppers. The long Cheyenne cayenne chiles will be the topic of another post. This post is about red ripe jalapeños and salsa.

Would you believe my garden has never produced a red ripe pepper up until this very day. What a red-letter day. Red-ripe-letter day. What could I possibly do with such memorable vegetables. After a moment’s contemplation, I decided to make the most colorful salsa possible. The photo above displays the most colorful ingredients available from the garden. From left to right in the photo–Tiburon dark green poblano pepper, Havasu pale yellow pepper, El Jefe red jalapeño pepper. Above the peppers, a Red Zeppelin storage onion. Above that, an Ace green pepper. At right in the photo, red cherry tomatoes.

Also a word about this particular food processor. After I gave away my big old Cuisinart with all its multiple cupboard-hogging attachments, I thought a replacement would be too expensive and would still take up too much space. I have a small Cuisinart, which is good for many things, like small batches of pesto, but I missed having a roomy food processor for something like salsa. Long story short. This is a Hamilton Beach. $40. That’s not missing a zero. $40. It’s roomy, but it fits under the cupboards in my small kitchen. Its only attachment is a slicer/grater add-on that I rarely use.

This food processor has Off or On. And Pulse. That’s it. Love it. I use Pulse for everything because it’s best for controlling texture from coarse to finely chopped. For this colorful salsa, I wanted a coarse chop, which was achieved in a few seconds, as can be seen in the photo above. Looks about right. I like chunky salsa.

All the ingredients were from the vegetable garden except the juice from one lime. I lacked cilantro from the garden, which is regrettable. All spring and early summer, the cilantro springs up everywhere in the vegetable garden and grows 2′ high. I have no use for it until the tomatoes and peppers bear fruit. By that time, the cilantro has produced hundreds of coriander seeds and dried up. What is the answer to this conundrum. More research needed for next year. There are little cilantro plants starting up again in the garden. Perhaps they will be big enough before the tomato and pepper season is over.

There has been a recall of bunched cilantro from the stores, so I dislike the thought of buying cilantro. Yesterday, I found a little cilantro plant at Whole Foods for $2, which I bought. So that will work for the next batch of salsa.

Above is this day’s salsa in a Mason jar ready for the freezer. It’s delicious, even without the cilantro. Spicy hot. Colorful, if I do say so myself.

The lid of the Mason jar is left loose so the jar won’t break during the freezing process. I’ve written about my freezing philosophy in other posts. Mostly, I don’t care for plastic and try to not use it as much as possible. Yes, jars will break, but I’m careful with them. I have loads of space in a relatively new upright freezer, and I like the look of the jars on all those shelves. I call it my pantry. Always do what works for you. And pleases you. When possible.

Got to make lots more salsa for the long winter. Red-ripe jalapeños are a good and colorful addition to the recipe.

One Comment on “Red ripe peppers and colorful salsa”