Posted on September 2, 2015 by daysingarden

The 2 plum tomato varieties this year are both from Johnny’s Selected Seeds. I’ve grown both of them in previous years. One of my tomato goals for this year is to decide between them for next year because they are so similar.

Speckled Roman plum tomatoes are heirloom indeterminate tomato plants. The fruits make excellent sauce, but they can also be used as slicers if the regular slicers aren’t available. The fruit is elongated and has the most lovely yellow stripe. To add to their plus qualities, the speckled Roman seeds germinated well this year when planted indoors in April. 6 speckled Roman plants survived their indoor experience and were ready for planting out in May.

Amish paste plum tomatoes are also heirloom indeterminate tomato plants. Their fruits also make excellent sauce. Their fruit is much fatter than the elongated speckled Roman fruit and is a plain tomato red without any stripes. Johnny’s Selected Seeds catalog attests to these descriptions in both written descriptions and photographs. Actually, I’m cheating a little in my selection of the photo above to represent a true red Amish paste tomato. Look closely. Oops. Yellow stripes. 2 Amish paste tomato plants survived their indoor planting and were planted out in May.

6 speckled Romans. 2 Amish pastes. Looks like I’m depending on the speckled Romans as the major source for sauce this summer. This is important because I like to freeze enough tomato sauce to last through the winter. 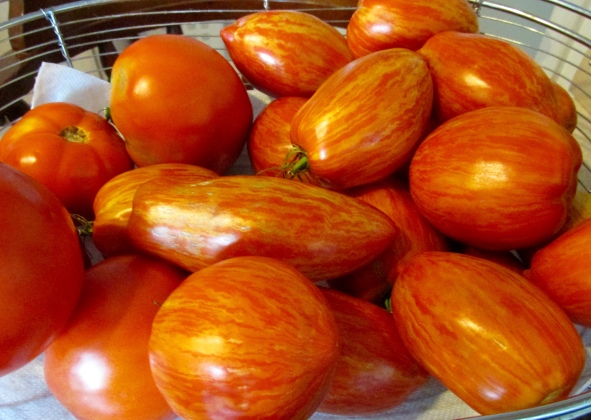 So now, the tomato harvest is in full swing. Eating lots of tomatoes. Starting to freeze lots of tomato sauce. And I’m starting to notice something that hasn’t happened in previous years. The speckled Romans are getting fatter. The Amish pastes are sporting yellow stripes. What’s going on. Why do I care. There are some slicers in the photo above–the really round red ones to the left–but anything with stripes is definitely a plum. Fat plums. Elongated plums. All with stripes. No all-red plums. Not a one.

On August 30, I picked the 2 plum tomatoes shown in the photo above from the humongous speckled Roman plants I’ve been complaining about. Finally, they are producing some fruit. But my point is that I’m absolutely sure that this is a speckled Roman plant. I lose track of plants in the vegetable garden and confuse different varieties all the time. Spinach varieties are particularly hard to me to keep straight for some reason. But I know for absolutely sure that these humongous plants are speckled Romans. So their fruits have yellow stripes, as they should, but they are fat, not elongated. And there are no fat plum tomatoes without stripes in the entire garden. None. The Amish pastes continue to be fat, not elongated, but they have yellow stripes.

So there’s been a plum tomato mash-up in my vegetable garden. Cross-pollination, I guess. All those bumblebees busy getting me confused. I like yellow stripes. I like fat plum tomatoes. I should be celebrating. I have produced a new variety of plum tomato. Or the bees have anyway. Should I call them speckled Amish. That doesn’t seem respectful to the Amish people. What about Roman paste. But that would exclude the distinguishing yellow stripe from the name.

I don’t know. I’m always saying that these days. I don’t know. I do think that next year I will plant Amish paste tomatoes. I want to see if they can still produce red plum tomatoes. I’m also partial to the Amish pastes because, although they did not germinate so well as the speckled Romans indoors in April, they are healthier tomato plants out in the garden.

Can’t believe how much I’m already thinking about next year. So happy I’m writing these posts, so perhaps I’ll have some chance of remembering all these immensely important decisions I’m making about the garden. After all, that’s what a garden diary is for.