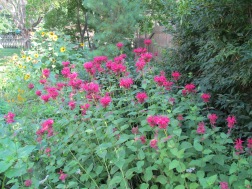 I started the month of July thinking how much the gardens had become a jungle. Particularly the old apple tree area, seen in the photos above, which was fast getting overrun with weeds. Just to be clear, the sunflowers and the bee balm in the photos above are lovely, in my opinion. It’s the weeds sprouting up in the bare spaces between them that seem jungle-like to me.

Purple coneflowers couldn’t seem to crowd enough blossoms into their allotted space, as can be seen above. In the meantime, crabgrass, galinsoga, and smartweed were everywhere. To say nothing of the creeping Charlie, prostrate knotweed, and broadleaf plantains that dominated the area we mow and call a lawn. 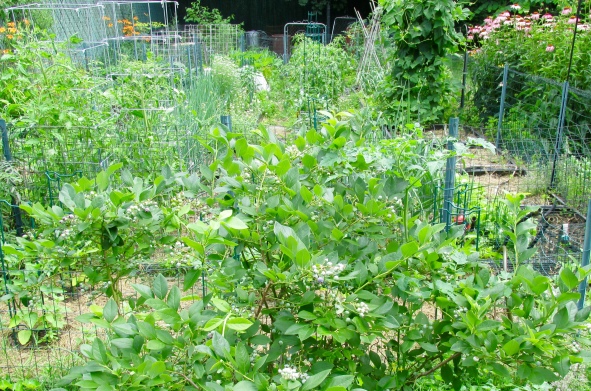 The vegetable garden above had its own jungle aspect as tomato plants and pole beans grew higher, as cucumber and pumpkin vines took up more space, as summer squash plants overran their bed, as lettuce bolted, and as onion plants became decided messy.

Then the rains stopped coming. We’ve had less than 1″ of rain this month. The quarterly water bill was my highest ever, as I continued to irrigate the vegetable garden. All the growing slowed. Weed growth switched to seedheads and pods.

Concentrating on eradication of crabgrass, galinsoga, and smartweed, a sampling of which can be seen above, I managed to bring order to 2 areas of my garden.

First, behind the vegetable garden, where a solid mat of crabgrass was torn out, alfalfa seed planted, and wood mulch picked up free from the county put down. Looks better than crabgrass, doesn’t it, in the photo above.

The alfalfa is just making its appearance in the photo above. Have to remember to water it. My plan is to use the alfalfa as green manure as well as ground cover. It will be mowed regularly, bagged, and composted. It surely is better than crabgrass. 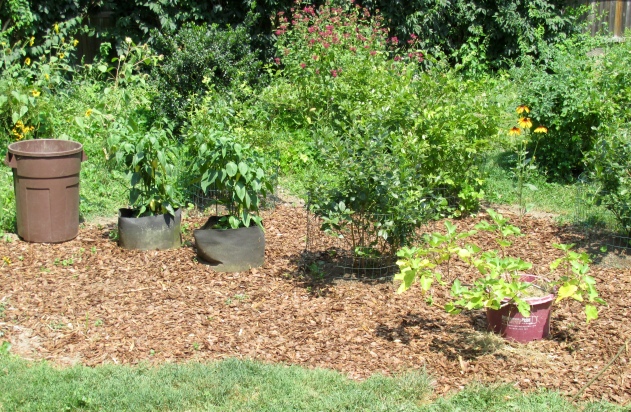 Next, crabgrass was dug out of the old apple tree area, starting in front, and mini pine bark chips bought in bags from Agway was put down. This is a ongoing project. As you can see in the photo above, much of the back area has yet to be done. Don’t the pine chips just lend an air of serenity and civilization to the scene. In place of the jungle. The weed trash can at left in the photo reminds me I still have many trash cans to fill with weeds before I’m finished. And the weeds are fast going to seed. You could say they are winning in those areas I have yet to attack. They are winning a battle, perhaps, but not the war.

Not only are we experiencing drought conditions. We are also in the midst of a heat wave. Certainly slows me down. The heat and dryness have compacted the soil so badly that weeds are almost impossible to pull or dig. We need some rain for sure.

The lesson to be learned from the improved areas noted above is to not just weed, but to remediate. While it’s futile to dump mulch on top of weeds, which will simply push through, it’s also a waste to weed thoroughly but do nothing to remediate the weeded area. So, weed thoroughly. Then plant ground cover and green manure. Put down wood chips and mulch. Some weeds may still regrow, but they will be easier to pull, and the weeder’s spirits will be lifted by the improved appearance of the area.

One more improvement happened simply by my wishing it to happen. Or so it seemed. Norway maples and white walnut trees were hanging over the back fence of my garden. The trees were pretty ugly to start with, particularly the white walnuts, and they were shading the back area more and more each year. Well. You’ll never believe.

What a hugh difference the tree removal made to the back area of my garden, including the back area of the vegetable garden. I love trees and don’t usually like to see them cut down, but removal of these ugly Norway maples and white walnuts created space for some more valuable trees. Now, when we look at our back neighbors’ yards, we see tall oak trees instead of a jungle of ugly trees. 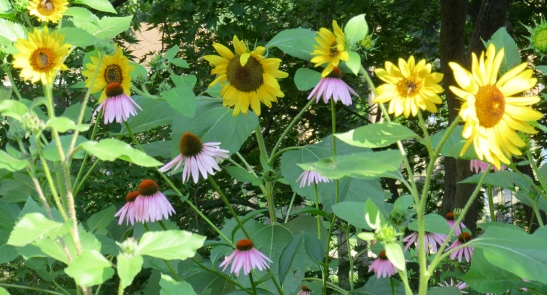 July’s highlights would not be complete without accounting for the blooms and blossoms of the month. Not as abundant as in the spring months, but they have their own charm. Obviously, the birds, butterflies, bees, and other insects think they are just fine.

Purple coneflowers (Echinacea purpurea) have to rank #1 in a poll of butterflies and bees, as is evident in the photos above. From left to right, a red admiral, an eastern tiger swallowtail, and bumblebees are attracted to the purple coneflowers.

Sunflowers are probably first with the birds, as well as butterflies, bees, and other insects. After all, the birds love black oil sunflowers seeds at the feeders all fall, winter, and spring. Why shouldn’t they enjoy some fresh seeds in summer. I stopped feeding birds at the feeders this month. There are so many good things to eat in the garden. Seeds, fruit, insects. A regular smorgasbord. 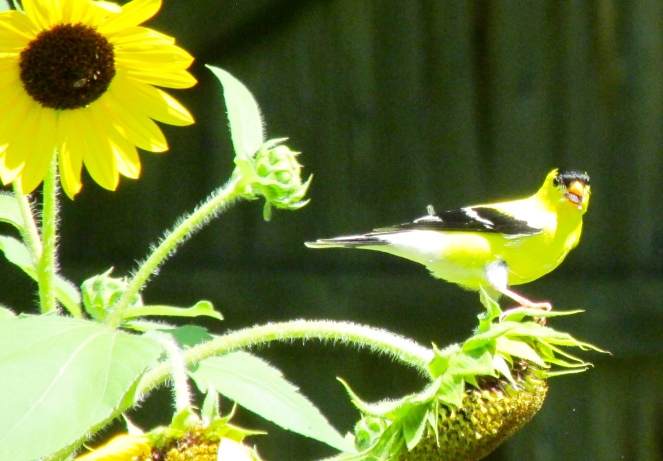 First, the American goldfinches are regular visitors to the sunflowers, as can be seen above.

Bee balm (Monarda didyma) is big with the bees and other insects, as its name implies. The flowers are getting a little scraggly now, but that doesn’t seem to matter to their many visitors.

Above are wasps and bumblebees enjoying the bee balm blooms.

Watching the activity around purple coneflowers, sunflowers, and bee balm this month, it has occurred to me that I don’t really care if these plants are native species or not. What I care about is that they seem to attract beneficial wildlife to the gardens. If native species attract more wildlife, as Douglas W. Tallamy says they do, then I want native species. Not because native species are somehow more deserving of a place in my garden. No. But because they attract more birds, butterflies, bees, and other insects that are an important part of the garden. I may have more to write about this after I think about for a while. 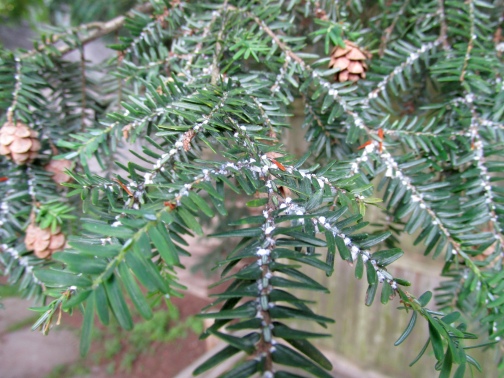 On a brighter note, I had great fun taking photos of a few butterflies and identifying them. For example, the red admiral shown earlier in this post. I already knew the eastern tiger swallowtail, a common butterfly in the gardens.

I didn’t know how to differentiate the male eastern tiger swallowtail from the female, however, until I read about them on the NABA-North Jersey Butterfly Club website. The females, it turns out, have blue markings near the base of their tails. Well sure enough. As you can see from the photos. The male at left. The female at right. So cool. One day I saw 3 eastern tiger swallowtails around the purple coneflowers. That was a exceptional day. How I wish more butterflies were in my garden these days.

So, the gardens seemed like a jungle to me in early July, but working at weed eradication and remediation of weedy sites, plus the removal of a jungle of ugly trees, helped me to see my garden as less jungle-like and more serene and civilized. The summer blooms plus some birds and butterflies made the month memorable for me.

Even with the heat and the drought, I’m looking forward to a renewed war on the weeds. Also to planting a fall garden, eating lots of good produce from the vegetable garden, especially tomatoes, and reading in the shade–or the air-conditioning if it’s absolutely necessary.