It’s time to make an accounting of sweet and hot peppers in July. The photo above is of the vegetable garden harvest on July 17. Lettuce, also part of the harvest, is not shown but can be found in the post Lettuce in July. Many varieties of peppers planted into the vegetable garden this season are present and accounted for in the above photo–bells, frying peppers, Havasus, and jalapeños. Cayenne and ancho/poblano pepper plants are growing in the garden but are not represented in this day’s harvest.

On June 8, I wrote the post Peppers in June, and while it might seem a bit boring, it is one of my best efforts at vegetable garden record-keeping so far. Without that post, I would have lost track of some peppers that were planted out. The post also reminds me of the goals and experiments I had in mind when I planted particular pepper plants in particular spots in the garden, and how those experiments are working out. This is an important aspect of my garden diary blog, so far as I’m concerned.

So here is an update on all the pepper varieties, both hot and sweet, in my garden.

I’ll start with the sweet peppers. 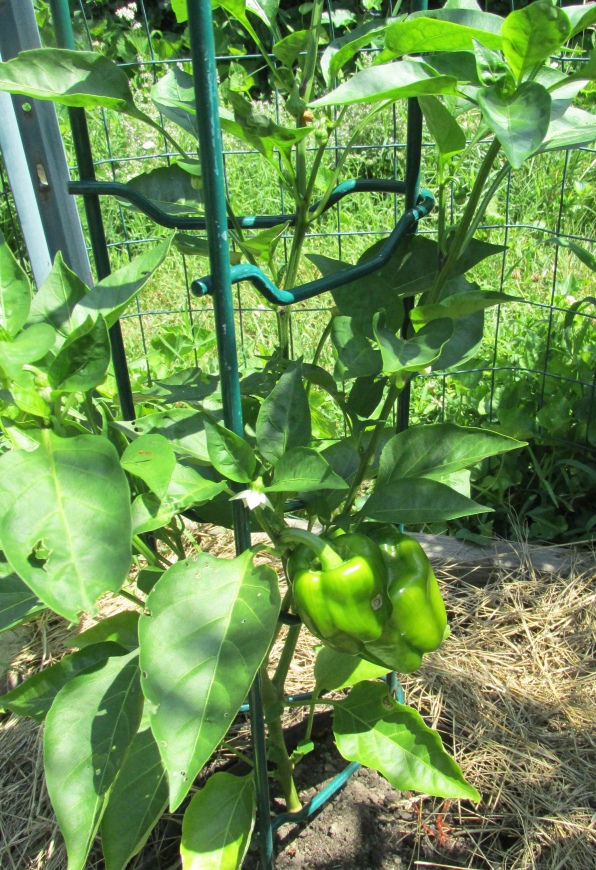 Ace bell peppers. F1 hybrids. 2 plants both in the small extension to the vegetable garden. The plant in the photo above is producing well already. 2 peppers can be seen growing.

In the middle of the same small extension area is the only Yankee bell remaining. Yankee bell peppers are open-pollinated. I don’t think that is the reason the Yankee bell is behind the other bell pepper plants. It was small when it was transplanted out. We’ll see what happens with this Yankee Bell.

I have been giving some thought to terms such as open-pollinated, hybrid F1, and heirloom. I hope to write a post about these things one of these days. 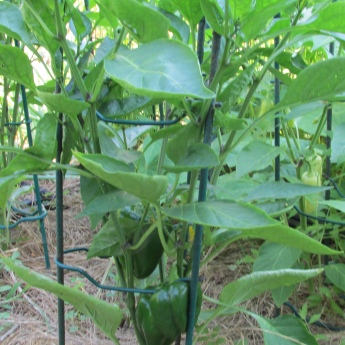 That leaves the Intruder bells to be discussed. F1 hybrids. 2 plants in the main vegetable garden in a raised bed with 2 Havasus. They are toward the shady end of the vegetable garden. I thought the sunny/shady distinction would make a big difference with the pepper plants, but that has not been the case. Some of the biggest and most productive plants, at this early stage of pepper production, are in shady or semi-shady locations. Go figure. The Intruder plants are large and healthy. The peppers look tasty. Soon, I should do a taste test between the Ace bells and the Intruder bells. Also the Yankee bell, if it ever produces. Why buy seeds for 3 bell peppers every year if I can determine a favorite.

Carmen sweet Italian frying peppers are growing in the small extension area with the Ace bells and the Yankee bell. F1 hybrid. 3 plants. Carmen is the only frying pepper planted this year. Looks good so far. So far, I have picked green peppers. It would be nice to have some red ripe ones too. I must learn patience.

In these early days of pepper harvesting, most peppers have been used in garden salads or sautéd with onions for just about any main dish. As production speeds up, I’ll have to consider preserving some for the winter. I just ordered a dehydrator, mostly because of the promise of a good pepper crop this year. Now I’ll have to learn how to use it.

On to the hot peppers.

5 Havasu plants. F1 hydrids. Johnny’s Selected Seeds catalog calls the Havasu a Santa Fe chile. That doesn’t mean anything to me. I’ll try to figure it out. Last year was a crop failure for my Havasus, so I’m particularly eager to grow them well this year. They are pale yellow at the early stage, which is the only stage I have experienced so far. Medium hot. Beautiful in garden salads and cooked dishes both. 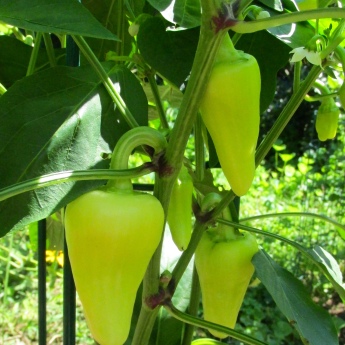 2 Havasu plants are located in the old apple tree area in black grow bags. This is the hottest area of the garden. The black bags are mostly to keep Daisy from running over them, since the old apple tree area is not fenced. 1 Havasu in this area is from new seed this year, 1 from leftover seed. There’s no difference in plant size or early production rate between the 2 plants. It’s reasonable to think that the importance of new seed is mostly for good germination rates, not for the quality of maturing plants. Funny how obvious this is now that I’ve thought about it for awhile. 2 views of 1 Havasu plant are shown in the photos above, but the other Havasu plant in the old apple tree area is similar in size and production rate at this point in time. 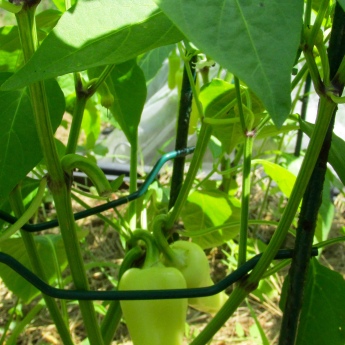 2 Havasus are planted with the Intruder bell plants in a raised bed toward the shady end of the garden. They are perhaps a little smaller than the Havasus in the old apple tree area described before. But they are growing and starting to produce, so, as I have already said, I think the sunny/shady distinction doesn’t matter much. 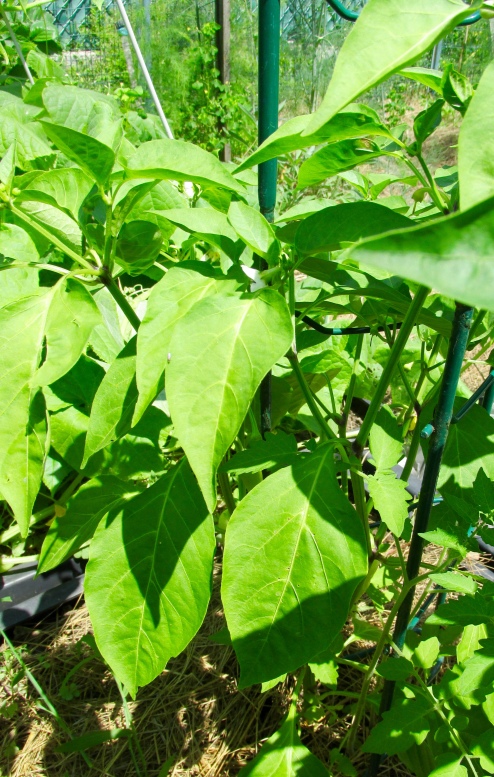 Havasu plant no. 5 is planted at the sunniest end of the vegetable garden in an area I considered prime for peppers. Guess what. It’s the smallest of the lot and the last to start production. I’m at a loss. It must be the soil. It is possible that peppers were in that raised bed last year. I need to keep better records. If so, that may be the problem. Perhaps it isn’t getting as much water as the other Havasus. Something is definitely wrong. However, the plant is healthy and starting to produce, so it may catch up. 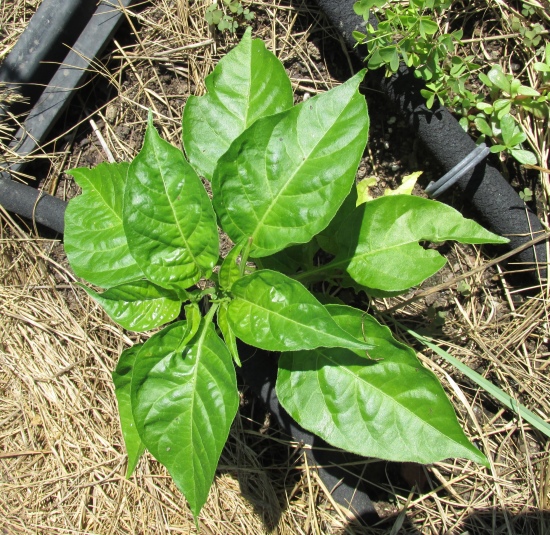 More disconcerting to me is the fact that I also planted my one and only Helios habanero pepper plant in the same raised bed as the Havasu no. 5 plant described above. It’s even punier and nowhere near production. Nary a blossom to be seen. As I’ve written in other pepper posts, habaneros, a very hot variety, are a favorite of mine. A small bit of minced habanero added to chili gives a warmth that nothing else matches. I only hope that this habanero, the only habanero to germinate and to survive under the indoor grow light this spring, will thrive sooner rather than later. I’m not asking for red ripe habaneros. Green, or yellow, will do.

To finish out my woes with the sunny end of the vegetable garden so far as peppers are concerned, 2 Tiburons, ancho/poblano F1 hybrids, 1 of which can be seen in the photo above, are languishing at that end of the garden as well. Spindly plants with no blossoms as of yet. It’s not the sun, since the Havasus in the old apple tree area get even more sun, and they are fine. If it’s not a lack of water, it must be the soil. I know that kale was planted last year in the raised bed where the poblanos are now. I’m calling them poblanos, the green ones, since anchos, the red or dried ones, are probably not going to happen in my vegetable garden. Not this year for sure. I gave all the peppers in this area–the no. 5 Havasu, the Helios habanero, and the 2 Tiburon poblanos–a foliar feed of Neptune’s Harvest fish fertilizer, which is high in phosphorus. Did it help? Perhaps. Perhaps they all would be dead but for that. The mysteries of gardening can be frustrating. 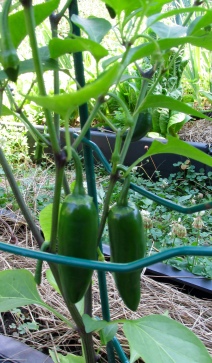 The other 2 El Jefe jalapeños, shown in the photos above, are located among the tomatoes plants in the vegetable garden. So far, they are holding their own and producing. The indeterminate tomatoes may overwhelm them. I’ll try to keep my eye on pepper property rights. 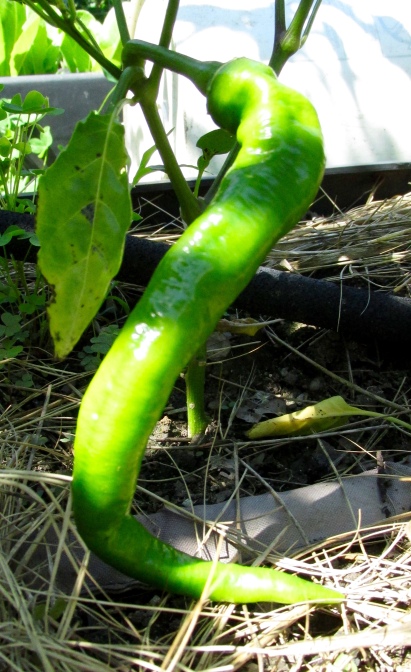 Finally, Cheyenne cayenne chiles, F1 hybrids, are also planted among tomato plants in the vegetable garden. So far, 1 cayenne chile plant has produced, as can be seen in the photo above. Pretty impressive, if I do say so myself. I’m hoping for more cayenne chiles to dry in my new dehydrator. Maybe even some red ripe ones. Time will tell.

Considering the fact that my pepper crop was pretty much a failure last year, I’m certainly off to a better start this year. I was worried about cross-pollination last year. Is that likely? More research needed. Also more careful taste testing is needed. Which bell pepper tastes best? Are sweet peppers hot, and hot peppers mild? Need to pay attention to details. And learn how to dehydrate peppers. Next winter, that will be a very good thing. And next January, hopefully I’ll know exactly which pepper seeds to order.