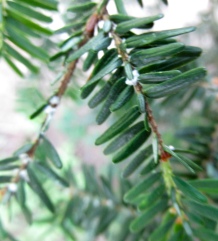 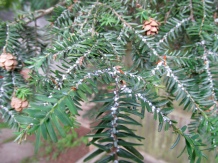 The eastern hemlocks (Tsuga canadensis) are infested with hemlock woolly adelgid (uh-del-jid). Help. The white cottony wax shown in the photos above are a hibernation stage for immature nymphs.

As soon as we noticed the white cottony wax stuff, we took a sample to the county extension office, who identified it and gave us a Rutgers fact sheet.

Hemlock woolly adelgids are aphid-like insects originally introduced into Oregon from Asia. They have since spread across the eastern U.S. from Virginia in the 1950s, to Pennsylvania in the 1960s, to New England in the 1980s. The first New Jersey infestation was in Burlington County in 1978.

Damage from woolly adelgids first appears as needle discoloration, followed by premature needle defoliation and branch desiccation, resulting in limb dieback within 2 years, beginning at the bottom of the tree. Death of tree occurs in 4 to 8 years.

Hemlock forests are in the greatest danger from woolly adelgids because sprays and injections are hard and expensive to administer in a forest setting. Woolly adelgids on more isolated hemlocks in suburban environments, such as mine, are easier to control.

I contacted my tree service. Their representative came out today. He thought spraying the trunks of the trees with a pesticide might be the best solution, explaining that the trees take up the chemical and deliver it to all parts of the tree. Another method that he mentioned involves injecting the pesticide into the soil around the tree.

The Rutgers fact sheet reports success using insecticidal soap or horticultural oil. These products must reach all insects on the underside of branches. High spray pressure and thorough coverage is imperative. My hemlocks are maybe 50′ tall, so this method may be difficult and expensive.

The fact sheet also mentioned preliminary research using an exotic lady beetle (Pseudocymnus tsugae) as a biological control. There are no effective native predators for the hemlock woolly adelgid, an introduced and invasive species.

Biological controls are not one of my options. My tree service representative didn’t offer insecticidal soap or horticultural oil as an option. He discussed different pesticides and varying delivery methods. He didn’t specify which pesticide or which method he would recommend. I will know more when I get his follow-up information and estimate. When I know more, I’ll write another post. Bummer news for a supposed organic gardener.