Tomatoes were planted out between May 19 and May 23, as I reported in the post Vegetable garden in June. They were covered with bed covers for a week or so in order to transition to the outdoor environment. Now they seem to relish the sun. They are just waiting for hot weather to take off and grow. Cages are now in place for all indeterminate tomato plants. The determinate Celebrity tomato plants are more like bushes that do not require cages. Drip irrigation hoses are laid out strategically, and salt hay covers the beds to retard weed growth and moisture loss. 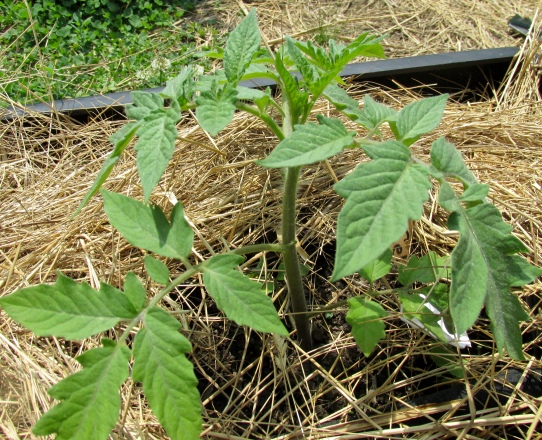 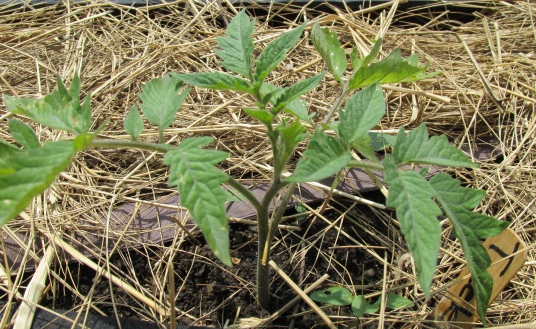 Johnny’s Selected Seeds catalog describes Celebrity tomatoes as a long-popular variety with good flavor. As I mentioned in the post Tomatoes, Celebrities are Jane Austen-type tomatoes. So sensible and decorous. Always knowing their place and respecting their neighbors. That’s because they are determinate tomatoes. My mother grew Celebrities, so they have been around for a while.

How can it be that only 1 New Girl tomato plant survived the indoor planting routine. I don’t know. I wish there were at least 2 New Girl plants. Oh well. Johnny’s Selected Seeds catalog reports that New Girl is first early with great flavor. I’ve planted and enjoyed Early Girl tomatoes in previous years, which New Girl replaces. I’m hoping this healthy looking plant survives and thrives. 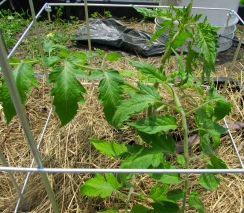 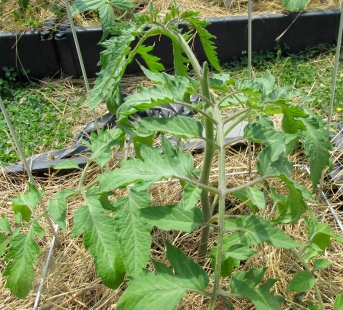 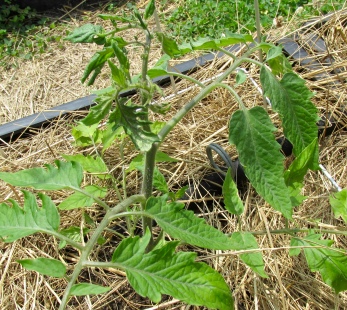 How is it that so many Speckled Roman tomatoes survived when other varieties did not. I don’t know. I know that I need a better situation for starting plants indoors. I’m pretty sure I’ve said that before. Speckled Roman plants are indeterminate, so they need to be caged and staked and pinched back. I’ve raised these plum tomatoes in other years. They make wonderful sauce, but are also satisfactory slicers if no other tomatoes are available for slicing. Wonderful flavor. 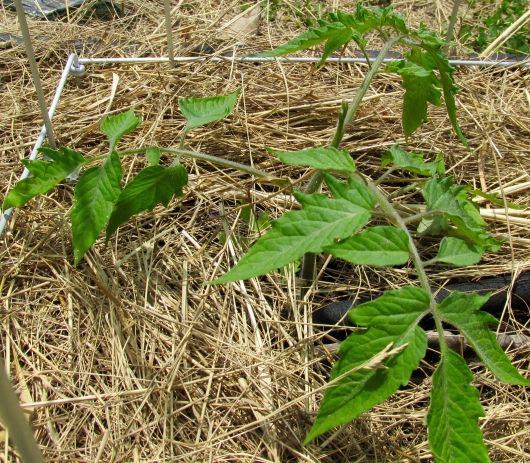 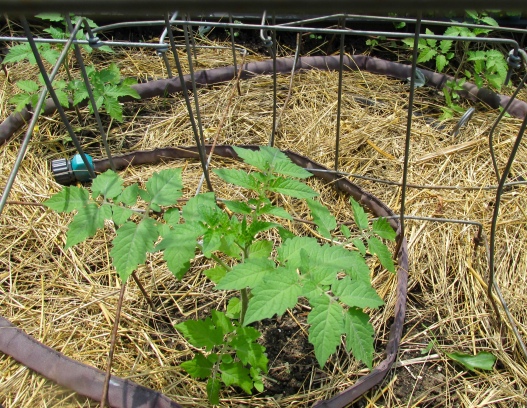 I had 3 extra Matt’s wild cherry plants, so instead of throwing them in the compost pile, I put them outside the vegetable garden fence in an unused cold frame without its window pane. 1 of these plants survived the transition to outdoors and will probably out-produce the plants inside the garden fence. As their name forewarns, they are wild. Weedlike wild. As I reported in the post Tomatoes, Matt’s wild cherries are delicious and abundant. They are great to snack on while working in the garden. They are wonderful in salads and in any prepared dish, bar none. They make great salsa. Can’t wait for some wild cherry tomatoes.

In my next tomato post, probably in July, I hope I will be writing about harvesting tomatoes. Here comes summer.

← Peppers in June
Weeds of June →