Spinach growing is so frustrating. I just now threw all leftover spinach seeds into the compost bucket. I am ordering 1 new spinach variety from Johnny’s Selected Seeds. This is because I can’t tell spinach plants one from another. Corvair. Space. Tyee. Carmel. I planted them all. I think Carmel was the most successful, and Johnny’s has discontinued it. I think Tyee was a total bust. I’m not sure about the others.

Carmel was first planted on April 3. It came up on April 16. As you can see in photo above, taken on June 6, it has started to bolt. Because it is a fast-growing variety, this shouldn’t be a surprise, I suppose. Several cutting were taken for salad, which was delicious. We had spinach in scrambled eggs last weekend, which is always a favorite.

I made risotto primavera a couple days ago. The recipe is in Andrea Chesman’s Serving Up the Harvest, a wonderful recipe book, in my opinion. Any available vegetable can be used in the primavera. I used store-bought carrots with garden asparagus and spinach. Barely cook the veggies in boiling salted water and drain. Heat up some chicken stock and a little white wine. Sauté some onions in olive oil. Add arborio rice and brown it slightly. Add the stock and wine mixture by the cupful, letting each cup get absorbed by the rice. This process of adding cupfuls of liquid should take about 20 minutes. Add the veggies. I thought the best feature of this risotto recipe was adding the broth and wine together. 20 minutes was enough time for the alcohol in the wine to cook off. 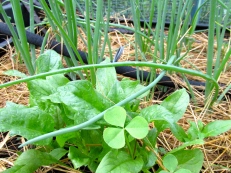 Back to planting spinach. All 4 varieties were planted on April 18. I’m not sure which varieties made an appearance since the markers have disappeared. I have only myself to blame for this, but it’s one of those gardening mysteries. I suspect the robins. Just kidding. I’m planning to harvest what spinach there is today, June 6, for salad. As Damrosch and Coleman say in The Four Season Farm Gardener’s Cookbook about spring spinach, it has a tender freshness. Eating it raw has not posed an oxalic acid problem for me as raw spinach sometimes does.

A fun thing happened when I was harvesting spinach last week. Some of the leaves had portions eaten off. Not holes in the leaves but curved indentations at the edges. When I turned these leaves over, what did I find but lady beetles, who flew away in annoyance. I can only guess that aphids were eating the leaves, and the lady beetles were eating the aphids. Hurrah for lady beetles. I didn’t see any aphids, so I’m only guessing about this.

Back to spinach planting. On May 2 the soil in the spinach beds tested 6.7 for pH. The range for spinach is 6.5 to 7.5, so additional lime is in order.

All 4 varieties were planted on May 5 with additional lime worked into the soil before planting. Today is June 6. This planting is a total no-show. What a disappointment. The seeds were all old. That’s why I just now threw them in the compost bucket. Perhaps the soil was just too dry although drip hoses were used to irrigate. I should mist new spinach beds each morning until the seedlings appear. Carrots the same.

So, new seed. Only 1 variety, so I can’t get anything mixed up. Emperor F1 is my choice. 37 days to harvest. Dark green, semi-savoy for spring and fall plantings. Upright dark green leaves with long stems. Moderate growth rate. Resistant to downy mildew. After another soil test, more lime will be added as needed. I’ll try to keep spinach growing simple and less frustrating.

← May work
Vegetable garden in June →