Here it is the last week of April. What a difference a month makes. As I wrote in the post March changes, I was in despair at the end of March thinking that the freezing temps and snow would never go away. 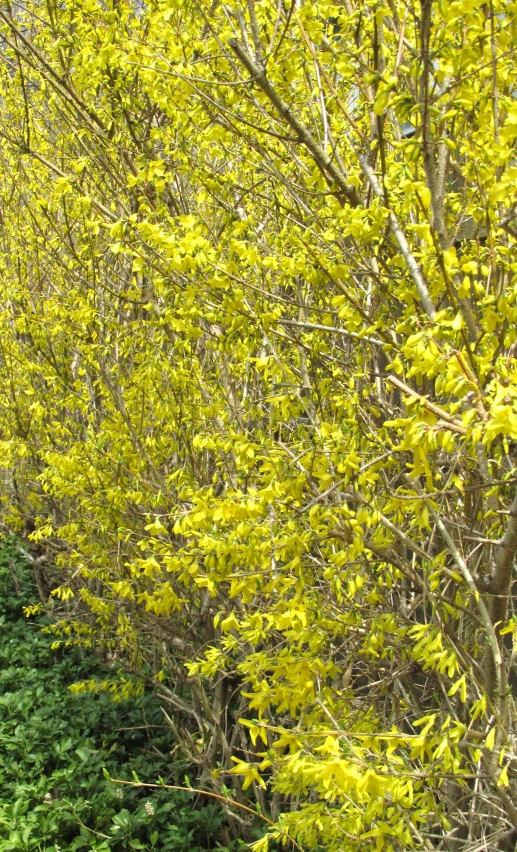 Although many days of April have been below normal temp-wise, still we have had warm, sunny days that brought the buds and blooms. So far, only one night in April was below freezing. We had 2+ inches of rain on April 20, which was wonderful. All in all, nothing to complain about weather-wise in April.

Of course, the forsythia bloomed. What would suburban New Jersey be without forsythia. Although I was sorry to discover that it is an alien species, and I have done my share of cursing at branches dipping to the ground and taking root, I’ve made peace with my particular patch of it. I let it go as high as it likes, but I’m ruthless at cutting back any drooping branches. Some people like to fashion their forsythia into balls or cut them off square. I don’t care for that look, but that’s a personal preference. I like the long, graceful branches waving in the breeze. Just so long as they don’t touch the ground.

I’m always amused to see rooted forsythia branches for sale at nurseries for $30 or so. I must put $1,000 worth of forsythia branches out at the curb for pickup every summer. Of course, getting them all properly rooted and then potted would take time and energy. Guess that’s what the nurseries are getting paid for.

Bottom line. Never let those forsythia branches get rooted unless you want a forsythia thicket the size of a garage in a couple years. No fun pulling those roots out either. 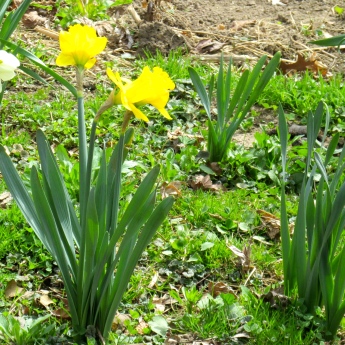 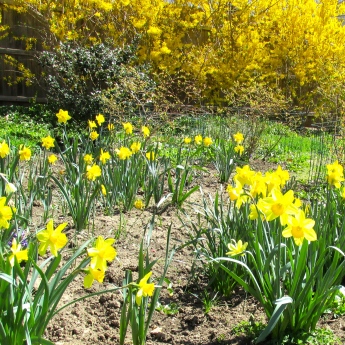 Crocuses and daffodils were fast on the heels of the forsythia to bloom. The bulbs that I planted a few years ago just get bigger and better each spring. 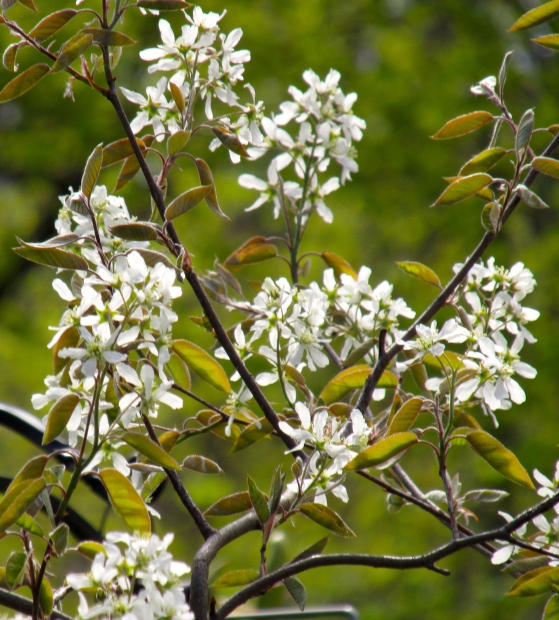 The serviceberry is the first shrub to bloom in my garden. Above is a photo of the white blooms on April 27. Serviceberry is native to New Jersey, so I can be totally happy about it. This particular shrub is still quite small. For several seasons, only one stem or trunk was in evidence, although serviceberry is by nature a suckering shrub and should have many stems. Turns out the rabbits were eating the little stems as soon as they sprouted. After I put fencing around it, the little stems started growing. This spring it is the prettiest it has ever been.

All the tree and shrubs are at some stage of budding out. The dogwoods have lovely little buds. I’m pretty sure this process of blooming is later this year, but it means that May should be spectacular. Dogwoods, redbuds, except mine is white, azaleas, rhododendron. So typically New Jersey. It has been said that Jersey springs are too garish for tasteful landscaping, but I love it all. Well, I don’t love the newer hybrid azaleas. Some of them are multi-blossomed red or purple, which is really too much. There aren’t any leaves visible when they are in full bloom. Just a blob of color. What’s the point. Ugh. I have an old-fashioned azalea that’s pink with single blossoms. I like it. It should be in bloom next month. 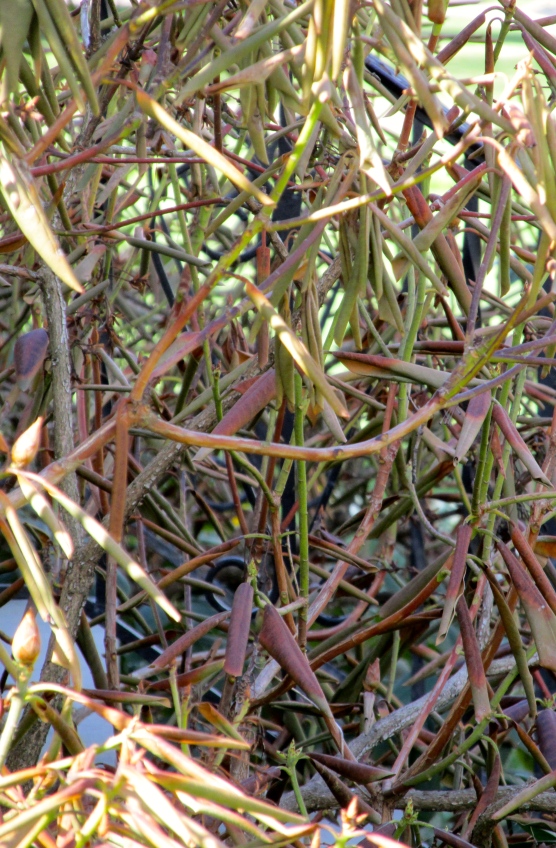 The rhododendrons are in trouble. The top leaves are all brown and falling off because of the cold winter. Online advice is to water them but wait a bit to cut any branches off since it may just be the leaves that are dead, not the branches. I’ll wait a while and see what happens. 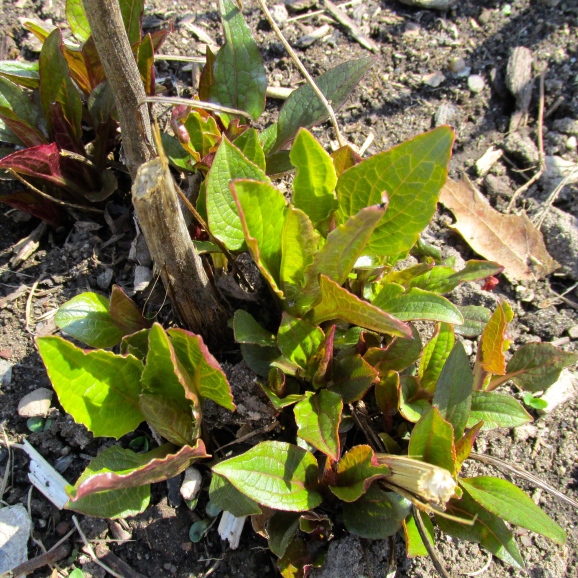 The wildflowers are making an appearance. The echinacea, or coneflowers, are coming up, as seen in the photo above. These were started indoors from seeds several years ago. Although they are a little hard to get started that way, once established they are care-free. They are a native species. Birds love the seeds if they are left standing through the fall and winter. This may seem unkempt until you get used to the idea. Then there is a certain beauty to the stalks and seed pods in an otherwise tidy bed. All in the eye of the beholder, of course.

Perennial lupine are also a native species. Just like little oak trees, they resent being transplanted due to their tap root, which is difficult to dig up. So plant them outdoors from seed. The fun part about wildflowers is that they are so independent once they get established. They don’t need to be watered to survive, although adequate rain certainly affects the quality and duration of their blooms. They seem to compete well against weeds, which is not surprising since they are often considered weeds themselves. They just bloom bigger and better most years. 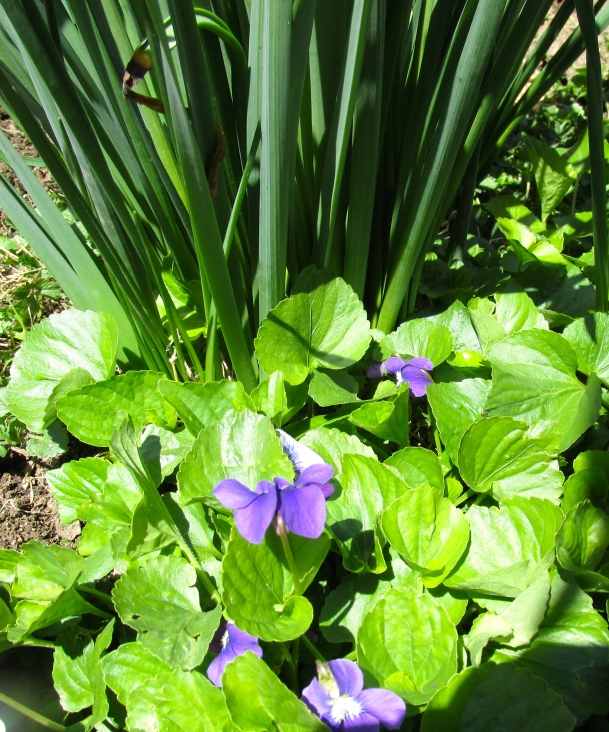 Although some books list blue violets as weeds, I don’t think of them that way. It is true that I’ve never planted any. They just show up on their own. Yes, they can spread little plants like crazy, so they are weed-like in that respect. But aren’t they cute. Someday they may work their way up my weed hierarchy, which is explained in full in the post Weeds. At present, they are wildflowers to me. They exist in both the flower beds and that area we still mow and call a lawn. They even show up in the vegetable garden but are easy enough to pull out and toss in the compost pile. 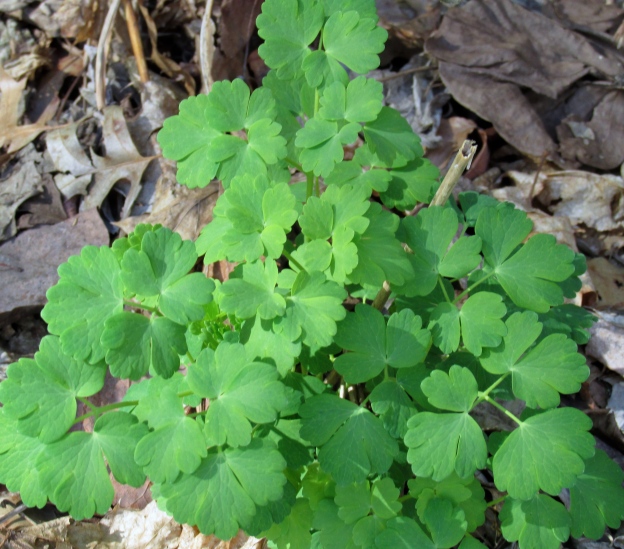 A wildflower that grows readily is the garden columbine (Aquilegia vulgaris), a European introduction. Drat. They remind me of happy days hiking in the Rockies, where their variation in color seems to be dependent on altitude. The books distinguish wild columbine (A. canadensis), which is scarlet with yellow centers, from the garden, or European, columbine (A. vulgaris). I’ve also noticed a difference between the A. vulgaris found growing wild and the hybrid varieties seen in nurseries and shopping mall flower boxes, particularly in Colorado. As I mentioned above with azaleas, the newer hybrid varieties are brighter colored and bear many more blooms per plant. Garish, almost. It’s a personal preference, but I really prefer the softer colors and more laid-back habits of the A. vulgaris found in nature. Hope they don’t disappear.

I brought a few columbine plants from a previous garden in New Jersey, where I found them growing naturally, and they have taken care of themselves since then. Flower colors range from pink to purple to white, different from year to year. Perhaps this is due to the acidity of the soil. I’m not sure. More photos when they bloom. 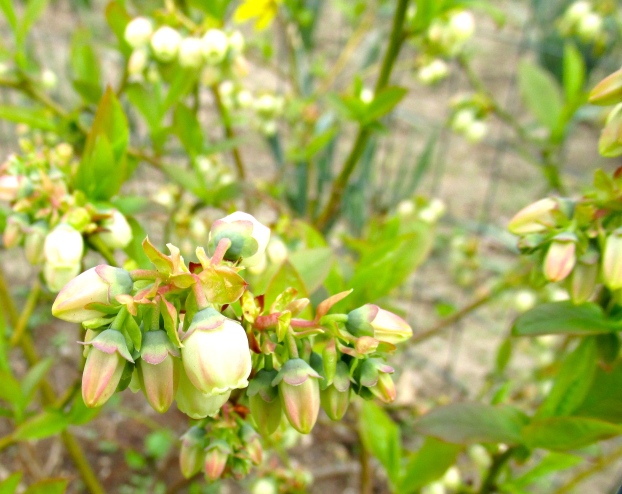 The blueberries are budding out. They are native. New Jersey is known for its blueberries. I have 6 bushes, two of each variety, which ripen at different times through the season. Patriot (early), Northland (midseason), and Jersey (late). Blueberries require an acid soil. Adding peat moss under the bushes in spring and/or fall usually solves that problem. Bees love the blossoms, and birds love the fruit. So do I. Quite a competition. In addition to being beneficial for wildlife and delicious to eat, blueberries are just plain pretty. Can’t ask for much more. 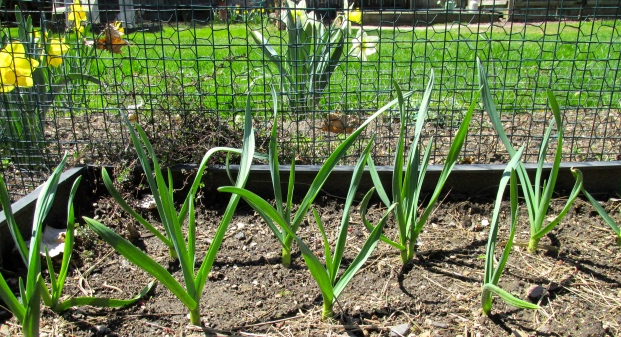 In the vegetable garden, garlic wins the April growing prize. Planted last October, garlic plants have the advantage of an established root structure. Lots of water is crucial at this stage. If not rain, then irrigation. 64 cloves were planted last fall, and 64 plants came up. I can never get over how easy it is to grow a crop like garlic. It’s the star of my spring garden. 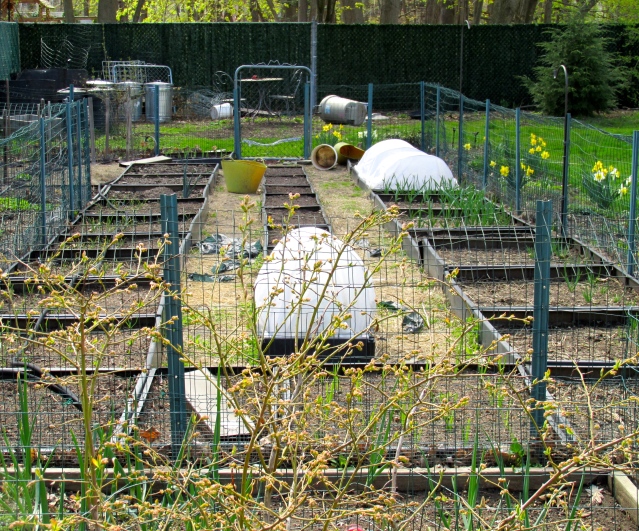 Otherwise in the vegetable garden, onions and leeks have been planted, but they are just sitting there waiting for warmer weather. Perhaps they are growing roots. Peas and lettuce are planted under row covers, but have not come up. Some spinach is up but not growing much. Wild arugula is up. Carrots are a no-show so far. You know that old saying about planting as soon as the ground can be worked. Well, I’m beginning to doubt the wisdom of that. I’m thinking don’t waste time planting early crops until May 1. I’ll make a note of that for next year. Onions and leeks excepted. 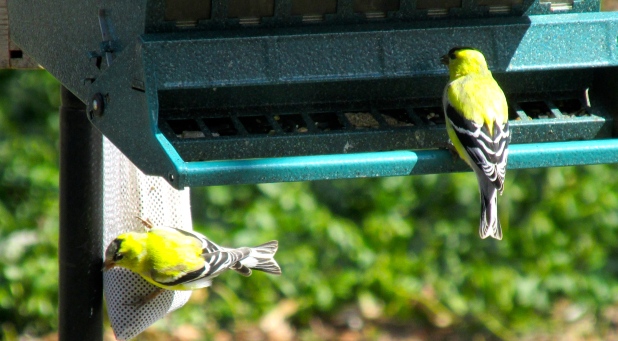 The birds at the feeders did not get my full attention in April as they did during the winter. I’ve been so busy with planting and weeding. The dark-eyed juncos left for their northern summer a few days ago. The male American goldfinches are yellow as can be now, in preparation for mating season. 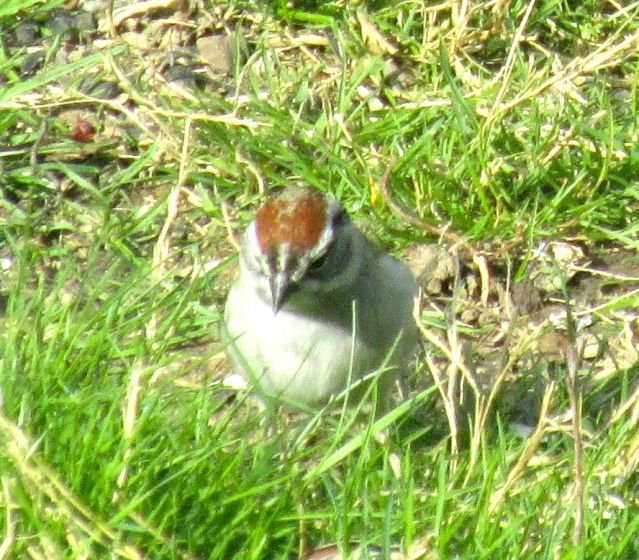 A new bird, a chipping sparrow, appeared under the feeders, recently returned from southern regions to spend the summer in New Jersey. There’s a photo of it above.

Finally, Daisy delights in April weather. We don’t walk as much as we did in the winter since there’s so much to do in the garden. But she’s as busy as I am. She greets her friends coming and going from school. She barks at passers-by she doesn’t recognize. She sniffs out any traces of critters from the night before. If Daisy is sniffing excitedly around the compost piles or shed, it’s advanced warning of a potential critter problem. She rolls in the grass and sleeps in the sun. Smart dog.

In all this happy talk about April blooms, I feel the need to say a word about noise. Noise is pretty bad. The street past my garden is a major thoroughfare for cars and trucks. But I pretty much tune that out. What’s harder to tune out is the racket from lawn services. Riding mowers can be noisy. Even worse are the leaf blowers, which are bloody awful. Leaf blowers for fall cleanup. Leaf blowers for spring cleanup. Now they are even using leaf blowers for snow removal. Omg. Leaf blowers are easily my most pet peeve. I hate them. They should be banned.

I sometimes fantasize about an imaginary conference for lawn services where one of the most popular seminars is titled Best Way to Destroy the Environment in 15 Minutes While Pretending To Make It More Beautiful.

Oh well. Back to April blooms. Mind over noise matter.

T. S. Eliot, in The Waste Land, says April is the cruelest month. I can understand that. For people who are grieving or suffering misfortune, it can seem that nature is uncaring, spreading so much beauty what with blooming plants and so much life what with mating birds and animals. This year, I’m thankful to say, I welcome all the beauty and activity. It suits my soul this year, even with leaf blowers.