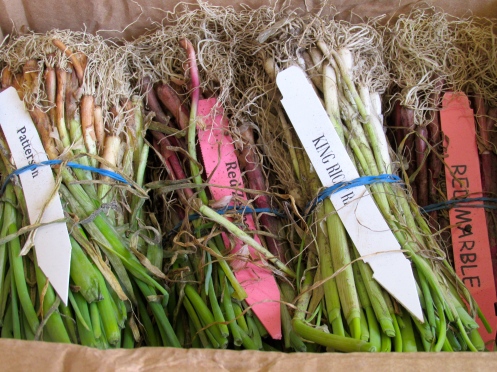 The King Richard leek plants arrived with some onion plants on April 2–still the last week of March, according to the calendar. Approximately 50 plants planted on April 3.

Please see the post Planting onions for a blow-by-blow account, including photos, of planting alliums such as onions and leeks.

Using a dibble, a 1″ dowel with a 45° cut at the bottom end, twirl holes in the prepared soil approximately 6″ apart. Johnny’s instructions say rows 24″ apart. These makes no sense in a 3′ raised bed, so I tend to follow the 6″ apart rule in all directions. The dibble holes should be 6″ deep, or deep enough so that only a little bit of the green top will show out of the hole. Don’t fill in the holes. Let the rain and irrigation fill them in. See Coleman’s “leek technique” demonstrated with photos in The Four Season Farm Gardener’s Cookbook.

This technique takes the place of hilling the leeks, that is, pulling soil up around the leek plants as they grow to extend the length of the white, edible portion of the stem. Because of space limitations in raised beds, hilling is not a option, although mulch can be added as the plants grow to lengthen the underground part of the plant.

King Richard plants will grow foot-long stems in the proper environment. I don’t think that’s possible in a raised bed. Eliot Coleman is happy with 6″ to 9″ white stems. I am too.

As I mentioned in the post Leeks, King Richard leeks have a summer harvest window. Left in the ground too long, they will form hard flower stalks in the center of the stem, making them inedible. Other leek varieties have late fall and winter harvest windows. Johnny’s Selected Seeds offers only King Richard leeks as plants. The other varieties are available as seeds. I hope to try planting Pandora leek seeds (late summer/early fall) and Bandit leek seeds (winter) in a cold frame. More about this in a later post. It will be an experiment for me. 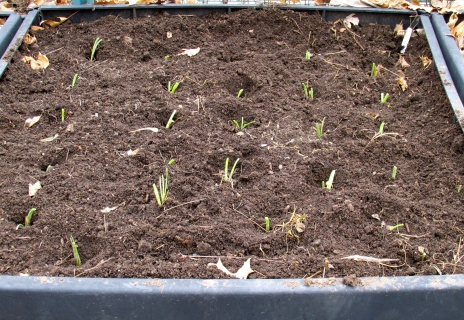 So this will be an experiment too. Everything else being equal, hopefully, will leek plants do as well in more shade as in full sun.