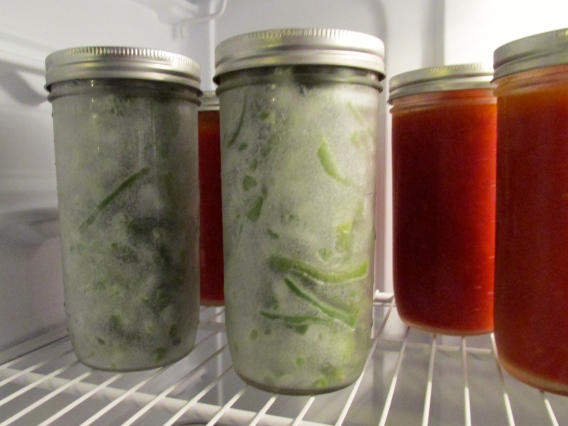 Back in the almost empty cupboard, uh, upright freezer. I have two jars of green beans left from last summer. Oh, sadness. This is only March. Good thing I’m not a pioneer woman depending on winter storage to feed my family until the next harvest.

In summer, green beans are pretty much a daily staple. I stem them outside, usually at the picnic table, throw the stems in the compost pile, take the beans indoors for a quick rinse, a 9-minute simmer–don’t overcook–and a pat of butter or, better yet, some olive oil. Yummy.

Preparation for freezing is about the same. Use a blanching method instead of the 9-minute simmer. Heat a pot of water to boiling and prepare a bowl of ice cubes in water at the same time. Cook the beans for 3 minutes in the boiling water. Start timing when the beans go in, not when the water returns to a boil. Don’t overcook. Use a strainer to lift them from the boiling water and plop them into the ice rinse for 3 minutes. Use tongs to lift them from the ice water, shaking excess water from them, and drop into containers for freezing. I use the strainer and the tongs when doing more than one batch. This saves the boiling water and ice bath for another round, perhaps with the addition of some ice cubes. If you are doing only one batch, a colander works just as well.

For me, the freezing containers are Mason jars, as I have explained in other posts. Leave room for expansion. Set lids loosely until frozen. That’s it. Above is a photo of some defrosted beans. I hope you can see there is almost no water in the jar. I’m not saying the beans are as good as fresh ones, but they aren’t bad.

I also make dilly beans for immediate use. Pack jars with freshly cooked beans, some pepper flakes, garlic cloves, and a head of dill for each jar. Make brine by heating equal parts of vinegar and water, plus salt as you like it. Pour hot brine over beans in jars, leaving room for expansion. Set lid on loosely until they are cool. Dilly beans keep for a time in the fridge because of the vinegar. Excellent, especially if you like dill, which I do. Last summer’s dilly beans are long gone. More next summer.

I should mention here that the dilly-bean recipe is actually for canning, but I don’t sterilize the jars, just put them through the dishwasher. So, I don’t consider them canned, which would mean they could be kept without refrigeration. I keep them in the refrigerator and eat them soon.

Thanksgiving and Christmas dinners require the traditional bean dish, but I have given up on the old creamed casserole recipe. The beans are too good for that. Adding some toasted slivered almonds to the usual butter topping is all that is required to make a festive dish. Remember the beans have been blanched. I cut the 9-minute simmer to 3 minutes, or just enough to warm the beans. Don’t let them get mushy.

In this post, I sing a song of praise to Fortex green pole beans, the seeds obtained from Johnny’s Selected Seeds, as usual. For a defense of my dependence on Johnny’s, please see the post January dreaming.

According to Johnny’s catalog, Fortex green pole beans are early and dependable, have an extended growing season, are completely stringless, and are delicious at all lengths. I agree. Johnny’s has designated Fortex beans as an Easy Choice. I agree.

Green beans are planted after soil temp exceeds 60° F. Around Memorial Day here. Black plastic mulch would warm the soil sooner, if I have time and energy to do that. 60 days from transplanting to harvest.

I use a bamboo tepee with six poles, which fits nicely into a 3′ by 3′ raised bed. After preparing the soil with the broadfork and adding plenty of compost, simply position the tepee, poke 3 holes around the base of each bamboo pole, about 1″ deep, and drop a bean seed in each hole. Johnny’s says 7 beans at the base of each pole, but they are working with a 4-pole tepee. Works out about the same. I planted too many bean seeds one year and got such a mass of leaves and vines I could not find the beans.

The number of beans that come up can be easily seen and more can be planted a week or two later if the crop seems sparse.

I should mention two other necessary steps. One is to loop twine over the tepee and down each pole to aid the climbing vines. They seem to grab the twine more readily than the bamboo pole. I tie loops at the bottom of each piece of twine and secure it into the soil at the foot of each pole with the metal anchoring pins that are used to secure row covers. I’ve found many other uses for those little anchoring pins, as you will see as the summer progresses.

In addition, it’s good to inoculate any legume seed. Johnny’s has a Garden Combination inoculant for peas and beans. I should have ordered some in the January order. Another item for my supplemental order from Johnny’s. So far fish emulsion and inoculant are on the list. I make a paste of the inoculant with a tiny bit of water, drop 18 bean seeds in to coat with the inoculant, and plant. According to Johnny’s, inoculants encourage high-nitrogen nodules on legume roots, feeding both the plant and the soil. A win-win. Inoculants must be used in the same season they are bought.

Keep the pole beans watered as with all vegetables. Irrigation is a necessity and will keep vegetables alive and growing, but to see a real spurt in production, just watch after a good summer rain.

According to Eliot Coleman in Four-Season Harvest, when green beans are overly abundant at the end of the season, or you just plain get tired of them, they can be left to dry on the vine for shell beans. Fortex shell beans are a lovely brown color when mature. I once threw a few dried ones into a soup. They were delicious. What with freezing green beans and making dilly beans, I’ve never gotten so tired of them that I’ve had shell beans to experiment with. Perhaps this summer.

I suppose with my love for Fortex green pole beans, I should devote 2 raised beds to them. But that might be more than I can deal with, so I think for this year I will stick with 18 bean seeds in one raised bed and give them such loving care they will outdo themselves in production.