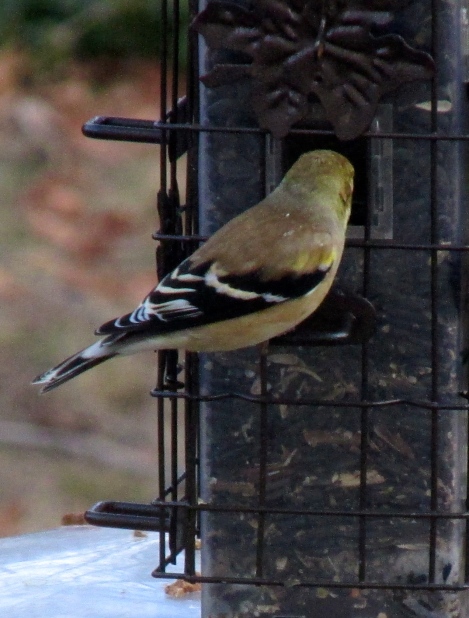 These photos were taken in January. Look at that. No snow. Birds of New Jersey reports that a small percentage of American goldfinches will stay in the area all winter, so I want to document that this one did show up at the feeders for one day, that I know of. However, Cornell Lab of Ornithology says they are most abundant at feeders in winter. Whichever. Maybe in New York State. It is true that the goldfinches seem to prefer seeds straight from the garden during the late summer months–sunflower seeds, purple coneflower seeds, even zinnia seeds being particular favorites.

I think this is a female. Male goldfinches, in winter, lose their bright yellow coloring of breeding season and look much like the females. National Geographic field guide shows males in winter with possibly still a black cap and a yellow shoulder patch, but not always.

Late last summer, volunteer sunflowers grew up under the feeders, both the ones with large flowers and the smaller branching Maximilian variety. The male goldfinches clung to those sunflower heads and dispatched those seeds as soon as they were edible. Actually, the females did too, I’m sure. It’s just that I didn’t notice them. The yellow males were so nearly the same color as the sunflowers that their presence first became obvious when I would notice the sunflower bouncing around on a windless day. Quite a sight, indeed. Next summer, I hope for photos.

I’ve mentioned this before, but it seems to me that finches prefer sunflower seeds to nyjer seeds, when they do come to the feeders. Black oil sunflower seed, the “gold standard” of bird seed. 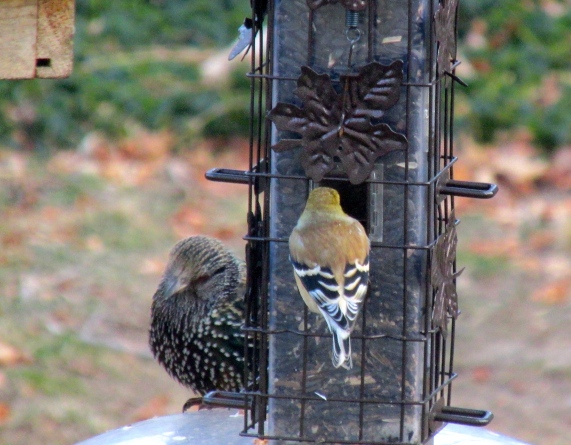 Here’s the dratted European starling, again, these photos from January. Now, in February, the starlings and house sparrows have gone away. I’m sure they will be back when the weather is warmer. The mourning doves have also moved on for the time being. Juncos, house finches, cardinals, and woodpeckers are the stalwart winter birds at the feeder. Also, white-breasted nuthatches, chickadees, and tufted titmice make up the jet-set of the winter birds. More about them in upcoming posts.